Minburn is excited to be a pass-through town for RAGBRAI 2013 on Tuesday, July 23!

Click here to see a map of vendor and event locations. 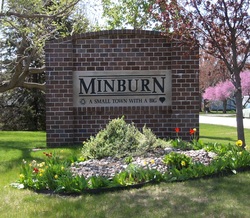 The City of Minburn welcomes the RAGBRAI 2013 riders!  Our town motto is "A Small Town With A Big Heart".

The City of Minburn will be serving breakfast to raise money for the restoration of our historic depot.  The depot will soon be moved from its present location across the street along the Raccoon River Bike Trail and will become a cafe/museum/trailhead.  More information on our depot can be found on the "Minburn Depot" page.  We will be serving food at 2 locations.  Pies and cinnamon rolls will be served at the Minburn United Methodist Church.  We will be offering 3 different breakfast meals at our Food Stand at Meek Park.  We will be serving biscuits & sausage gravy, a potato/egg scramble and hamballs!  We will only be making about 500 hamballs so come early if you want one!  We will also have pies and cinnamon rolls available at the food stand.

The Minburn United Methodist Church just made over 40 gallons of ice cream to along with the pie being served at the church.

"Lexington Road" a local band will be playing in the downtown area Tuesday morning for your enjoyment.

Backpocket Brewing will have a beer tent set up downtown.  Click here to learn more about this brewing company.

In 1948, an outdoor roller rink was built in Minburn by local laborers who donated their time to do something special for the youth in the community.  In 1951, the Minburn Roller Club, made up of about 20 members, presented its first skating show.  Soon the group named the "Singing Wheels" became known all over Iowa.  The production shortly rose to a cast of 150 members ranging in age from 3-60 years old.  At a three day event in Minburn, an estimated 10,000 were in attendance to see the "Singing Wheels" perform.  After 11 years of performing, the "Singing Wheels" ended, leaving many in our community with countless happy memories.  Minburn still hosts open skate nights in the summer months.  We will be showing a DVD of the "Singing Wheels" on our Big Heart Stage next to our skating rink.  Many of the performers will be on hand to tell about the productions and their memories.  We will have several of the original costumes on display also.

Minburn is a small farming town.  Some of our local 4-H participants will be on hand with their animals.  We will have an "ask a farmer" booth and will have several antique tractors for you to see!

Chris Cakes, Farm Boys, Breakfast Guys & Gals and Lindy-Sue Sweets will be on hand to help feed everyone.